Skip to main content
Other official information and services: www.belgium.be

The Belgian Tax Shelter is a government-approved tax incentive designed to encourage the production of audiovisual works in Belgium. The system is open to Belgian productions as well as international co-productions with Belgium that meet certain criteria.

All three parties benefit from this arrangement: the producer is offered a very attractive way to finance projects; the investor obtains tax exemption through a virtually risk-free investment; and the Belgian state gains from increased economic activity and spend.

How does it work?

Based upon the amount of qualifying audiovisual costs the production will spend in the European Economic Area, and upon the amount of direct and indirect Belgian-eligible expenses, a certified Belgian producer can provide Tax Shelter certificates to local investors. The investor must make its full payment within three months of signing the framework agreement. Through the system, the investor pre-finances the production and/or post-production costs in return for tax benefits and a possible fixed return on investment.

What’s the advantage for the producer ?

The Tax Shelter can provide additional funding up to 25-30% of the total qualifying expenses in the EEA. It allows the finance of up to 40-45% of the Belgian-eligible expenses. 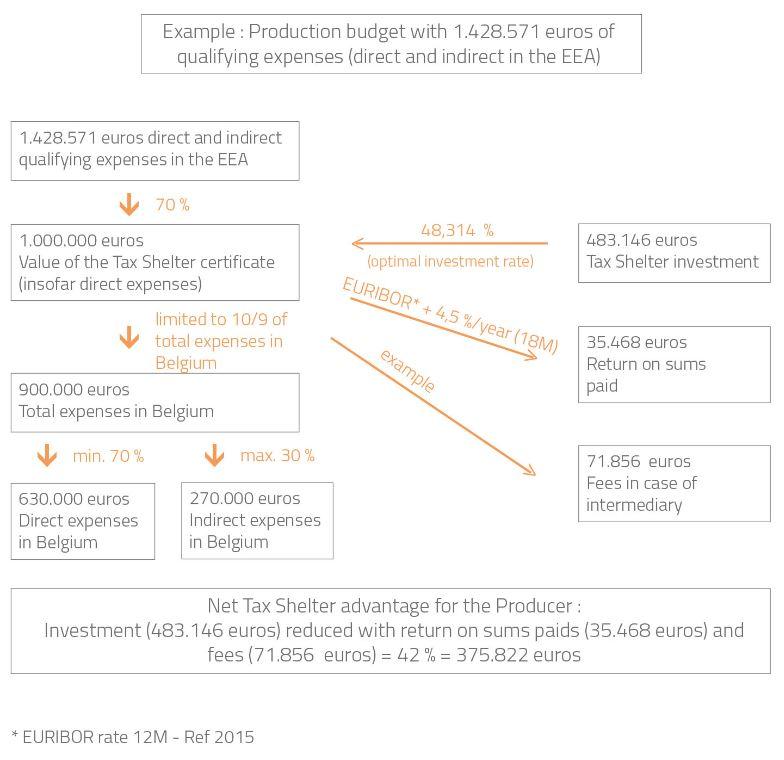 Which works qualify for the Tax Shelter?

European audiovisual works such as:

International productions such as:

Currently, such bilateral co-production agreements exist with Canada, China, Israel, Switzerland, Morocco, Tunisia and Chile. Others are being negotiated.

The Belgian Tax Shelter, a success story from the beginning...

The best and easiest way to gain access is to first find a local producer to make a co-production.